Susan goes outside, digs a hole, and plants a tree

We were visiting Costco for something else and of course, as is typical, found this wonderful columnar tree which would be perfect in the spot that we removed the juniper tree that was infested with the BoxWorms.  It took a bit to get it into the car but we did it...and then got it out of the car yesterday, leaving it in the garage overnight.

This morning I was busy but Robert says, "Are you ready to plant the tree?"  I guess it didn't really matter what I was doing...I was going to be digging the hole which I was always going to do. Robert, still recovering from the broken ribs and separated shoulder, would not be able to do it but I feared he would try if I didn't run to do it.

The initial dig was easy but then I reached the clay.  It was like cement.  It was well into the 80 degrees and even in this dress I was struggling.  And as I wrote on Facebook I wanted no comment about a dress...pioneer women used to do everyone in dresses, my grandmother wore a dress and an apron til the day she died, and I don't remember my mom even owning a pair of jeans.  So I gave up and called Marissa, hoping she would be free to come over and help.

Marissa is a tower of strength in so many ways. SO MANY WAYS.  And naturally she had the same fear about Robert trying to do it himself.  With her help we managed to get the hole deep enough!  I got out the special soil for the roots to sit in as well as to be surrounded.  Phew! Marissa refused to be in a picture but she saved me today!

But at last it was all done and I soaked the roots really well.  Luckily a huge storm blew in tonight and really set the tree and the root. 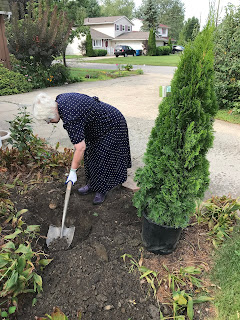 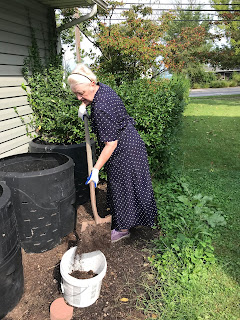 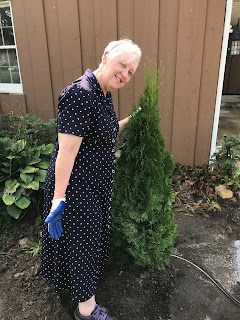 I NEED TO ADD A BACK STORY ABOUT MY TREE EXPERIENCE.  We were FaceTiming with Jordan a week ago and Robert whispers to him that when they are together he would tell the backstory to my planting the tree and then laughs.  Well, finally, much later I got it out of him.  Apparently HE had gone out and dug a hole in the ground for this tree, EVEN WITH THE BROKEN RIBS, STILL SLEEPING IN THE RECLINER....grrrrrrrrrr...but then he thought about it and filled it back in.  I want to say that I obviously didn't did my hole in the same area because the ground was rock solid and I even had to have Marisa come and help me get down farther because the roots of the previous tree was in the way and too hard for me.  So if you read that both Marissa and I had the same fear of Robert doing it...well, that should speak volumes.  I still find nothing funny about this even though Robert keeps saying I have to 'let it go'.  Oh no I do not!

Plus up at Shoreway we celebrated The Ohio Flags of Honor...a group that honors all the military from Ohio who have died since 9-11-2001.  I donated blood and the flags were amazing. 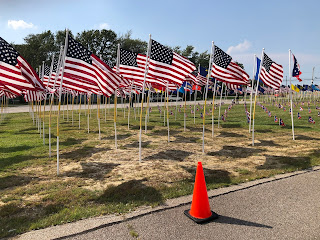 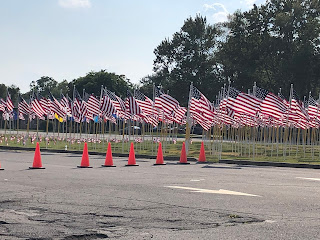 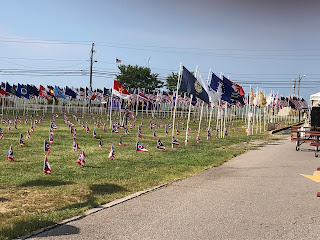 You are impressive and look just like a pioneer or an Amish lady...lol! Good for you and Marissa!